Political Life in the Wake of the Plantation 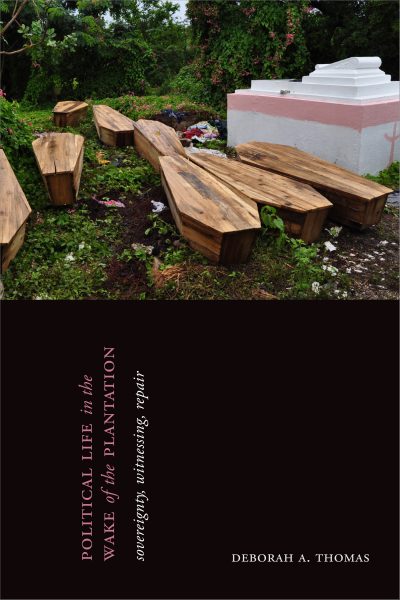 Political Life in the Wake of the Plantation

by Deborah A. Thomas

In Political Life in the Wake of the Plantation, Deborah Thomas leads us into a profound and multifaceted project of witnessing the persistent, proliferating afterlives of plantation slavery in Jamaica. Chapter by chapter, she grounds the witness in acts of watching, listening and feeling our way through the visual, affective, and historical archive she has built; it is an archive that constantly stretches beyond itself, beyond what an archive can be, to bring us deep into the sensorium of state violence, political surveillance, and Black radicalism inscribing Jamaica into hemispheric networks of hegemony and the struggles for liberation from them. “What does sovereignty feel like?” Thomas asks throughout, as she probes the affective and material registers through which the postcolonial garrison structure of Jamaican politics is lived, embodied, performed, debated, and enforced. She organizes her answer around three epochal moods, excavating the affective life of power in a sinuously nonlinear temporal movement: doubt for the neoliberal present, expectancy for postwar developmentalism, and suspicion for the cold war years of US intervention. These feelings, Thomas shows, are vectors through which individual lives become embroiled with political and economic forces. They also, however, animate collective struggles to reconfigure the legacies of plantation slavery and its differential valuing and devaluing of humans.

Political Life in the Wake of the Plantation moves breathtakingly between scales, between places and positions. The photographic portraits of Tivoli Gardens residents and their accounts of the 2010 military incursions into their West Kingston community bring an intense intimacy to Thomas’ work, even as she weaves them into painstakingly researched transnational circuits and exchanges running back decades before their birth. In Jamaica, to live politically in the wake of the plantation is to face conscription into networks of clientelism and patronage, to suffer police raids and the indiscriminate violence of law, to have your collective movements and trade unions surveilled, undermined, and violently suppressed; but the plantation’s wake is also a space of radical post-racial imagination, of prophetic visions of anticipation and return, and of creative practices of rebellious mutuality and anticolonial solidarity. Love, attentiveness, and repair finally motivate this book, a book that invites us not just to question our own relationship to the plantation and its afterlives, but to participate in tying together the uncertain horizons of past and future.